Tea can be a huge support through life, but never more so than for mums, who often have to restrict what they eat and drink while nurturing their children.

Tea for TTC and fertility

If you’re trying to have a baby, tea can support you in this journey. Having high levels of caffeine in your diet has been linked to reducing the success rates of conception, so looking to herbal and caffeine free fruit teas can help here. You don’t need to cut out all caffeine, but it is advised to stick to no more than 200mg a day.

Instead of a second cup of coffee or black tea, our Get Up & Glow fruit infusion is a great alternative. It has grapes as its base, giving you a natural sugar lift instead of caffeine. It’s also high in vitamin C with hibiscus and rosehips boosting this. So it can really help you ‘glow’ even if you don’t feel like it!

HotTea Mama Get Up & Glow

If you suffer from nausea in your first trimester, or longer, our blend of anti-inflammatory herbs can hopefully help soothe an upset tummy. Morning Rescue is a blend of herbs that have been shown in trials with chemotherapy patients, to have a positive impact on the severity of nausea. Ginger has an active compound called gingerol, which is believed to be why it has been used for millennia to help combat nausea. We blend this with lemony ingredients that are high in citrals, which again have been shown to help ease nausea.

It’s also important to avoid caffeine and tannins – these can both make nausea worse, so a normal cup of builder’s tea or coffee, will likely make you feel considerably worse.

Raspberry leaf tea has been used for millennia to support women to prepare for labour and also recover from labour. The NHS advise not to have any raspberry leaf tea before 32 weeks at the earliest, because it has been linked in lab studies to making uterine muscles contract. It contains an active chemical compound called fragrine which appears to make the uterus react in this way.

So you need to avoid it early in pregnancy, but by drinking it at the end of pregnancy it is shown to reduce the length of the second stage of labour (where you are pushing) and also reduce interventions in birth. We blend our raspberry leaf with peppermint to make it as delicious as possible, as unfortunately raspberry leaf doesn’t taste great on it’s own – it’s like a bitter green tea.

Breastfeeding is one of the most rewarding things you can do, but it is not always easy. From cracked nipples, to mastitis, tea can be a great support alongside your breastfeeding journey. Milk’s Up breastfeeding tea is designed to help you – with ingredients that are natural galactagogues. This means that they have been used traditionally to support milk supply.

Whilst there is limited research into this traditional use, small scale studies are starting to show that there seems to be a good reason for this. Fenugreek has been shown to help increase milk supply and fat content of milk, and fennel has some links to increased production too. Nettle, anise, lemon verbena and rosemary finish the blend, making it sweetly savoury and the perfect tea to have with a lactation cookie (or three)!

Tea for relaxation and sleep

It can be extremely stressful to be a mum – keeping humans alive isn’t easy! Our Night Owl herbal tea is designed to help reduce anxiety and help aid sleep. Each of it’s ingredients have been selected due to their anxiolytic benefits – their ability to reduce stress and anxiety.

Whole chamomile flowers and lavender are really high in linalool which is shown to have a big benefit on reducing symptoms of anxiety in studies. Valerian root has been shown in one study to be more effective than a sedative at helping sleep, and lime flowers and rooibos have both been used traditionally to help calm and sleep. So a cup of Night Owl can help you relax, take a breath and hopefully get a better night’s sleep.

Given how tired mums are – tea can be a huge support due to the caffeine it offers. And there’s no better tea for this, than our Newborn Wonder. A blend of white tea and whole rosebuds, on average it has c. 90mg of caffeine per cup. A normal cup of builder’s tea has c. 50mg. But white tea is also high in a compound called theanine which is a relaxant. In combination, the theanine and high caffeine content, almost give the caffeine a slow release effect. Giving you a gentle boost, for longer. So if you ever suffer from heart palpitations or the caffeine shakes, this tea is a great alternative.

If you find yourself struggling with monthly cramps and mood swings, the right blend of tea can also help. Our Over the Moon tea is a delicious blend of herbs and flowers to combat the most common symptoms of PMS, endometriosis and PCOS. Whole chamomile flowers and rose petals are relaxants and anti-inflammatory to help with cramps. Gingko is linked to improving mood and spearmint balances estrogen and testosterone levels – thanks to its ability to inhibit testosteron.

HotTea Mama Over The Moon

HotTea Mama is an award-winning functional tea company, in wellness for women. With teas designed to support the more challenging aspects of reproductive life.

Use code LUCYWATTY for 10% discount off your whole order from http://www.hotteamama.com/ 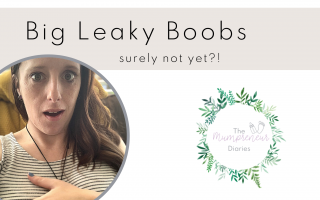 What They Didn’t Tell You.. 5 Tips for New Mums

What to Eat When You Are Breastfeeding